Updating.....this page is under construction 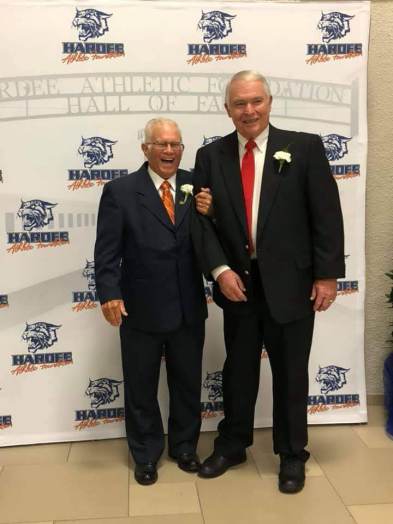 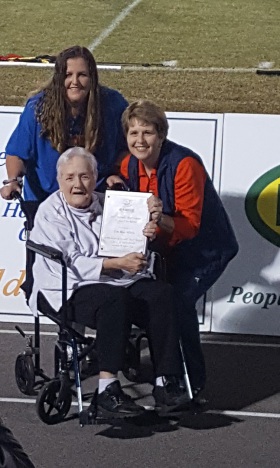 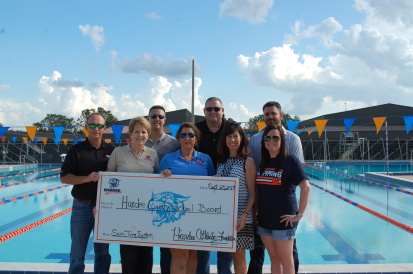 School Board Chair Paul Samuels, Swim coaches Tracy and Brittney along with Dr. Polk, principal and AD Travis Tubbs are happy to accept the check to purchase the swim timing system from Hardee Athletic Foundation and Utillitech 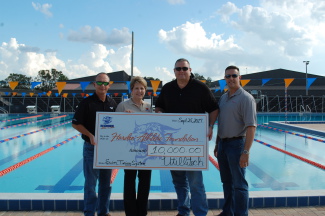 Mr. Stephens and Mr. Thompson of Utillitech presenting the donation for the purchase of a swim timing system to Hardee Athletic Foundation represented by Paul Samuels and Tanya Royal

Newest Hall of Fame members Matt Scott and Doyle Carlton III at the Hall of Fame after their plaque was placed on wall. 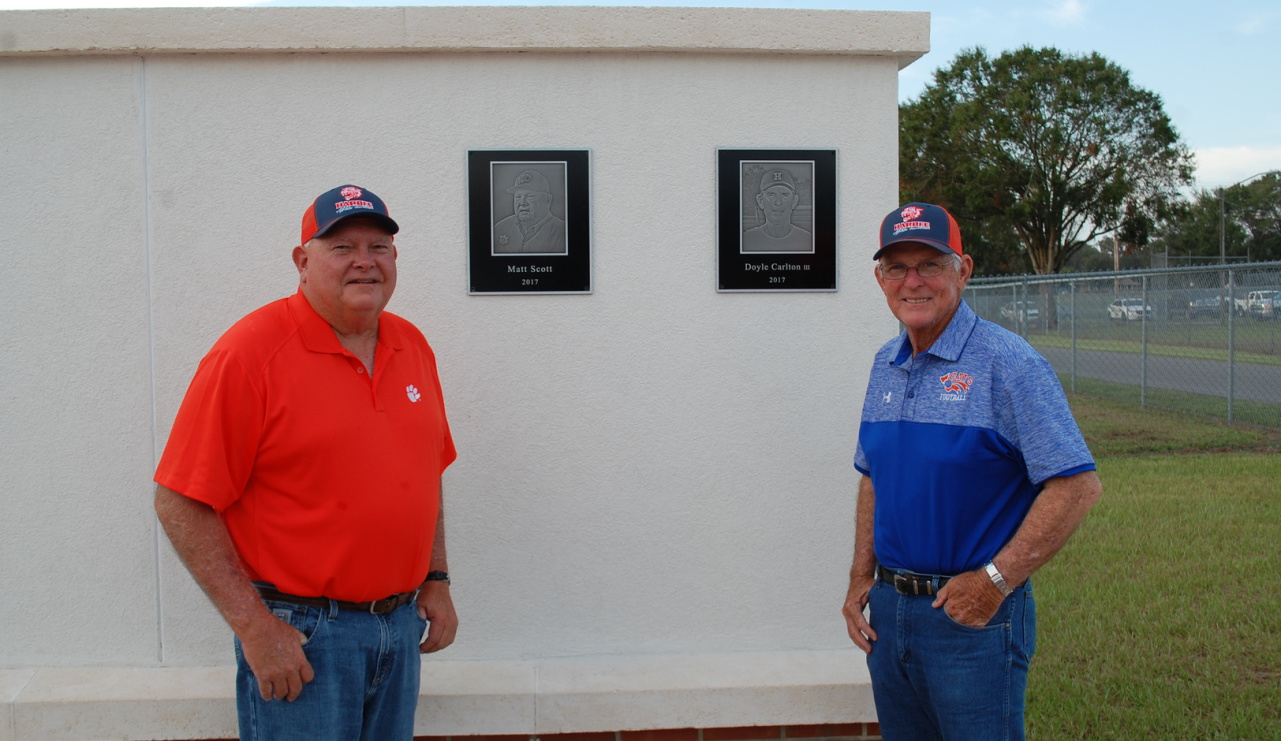 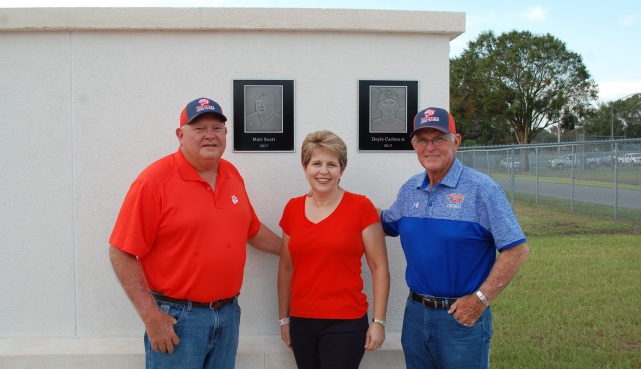 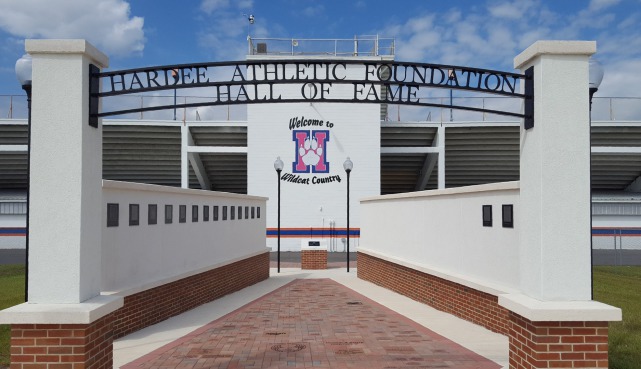 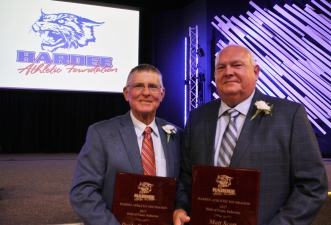 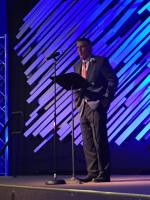 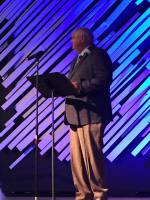 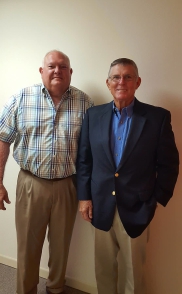 The Hardee Athletic Foundation has announced the 2017 Hardee Athletic Foundation Hall of Fame Inductees. The inductees are Doyle Carlton, III and Matt Scott. These men have made immeasurable contributions to Hardee Athletics. The inductees were high school athletes. Doyle played for Hardee High and Matt for Desoto High. They both began their coaching career in Hardee Sports in the seventies with youth leagues and continued through the years with different age groups including varsity sports. Matt and Doyle coached together in the old Hardee Youth Football League. They continued through the years and coached on several coaching staffs for Hardee High.  In addition to coaching they influenced young men through their character.  During and after their coaching careers they lead the local Fellowship of Christian Athletes. Many years they traveled to FCA camp each summer with a bus load of Hardee athletes to encourage their spiritual growth as well as their athletic ability.

Seats may be purchased now for the 6th Annual Hardee Athletic Foundation Hall of Fame Induction Ceremony and Dinner to be held on Friday, September 22 at 6:30 p. m.  The dinner will be held at Florida’s First Assembly Family Life Center 1397 South Florida Avenue.  September 22 is Wildcat Football Open Date. We hope you will be a part of the celebration by supporting this community event.  Seats are $50 each and may be purchased by contacting Foundation Executive Director Tanya Royal at (863) 781-0358, email hardeeathleticfoundation@gmail.com or go to www.haf-online.org and use the donate button to pay for your seat.  Seating will be limited.

We are excited about these two honorees joining the fourteen other Hall of Fame members on the Hall of Fame Wall at Wildcat Stadium.  The wall was completed last fall. There are still sponsorship opportunities with logo brick available and individual engraved bricks may also be purchased.  A brick would make an excellent gift to commemorate a birthday, graduation, any accomplishment or occasion.  Photos of the HOF wall and bricks may be viewed on our web page and Facebook page.  The Hall of Fame Members are Doyle Carlton, Jr., James Crayton, Bob Martin, Ernest Palmer, Leon Sharp, Dunning Terrell, Jerry Kapusta, Joe L. Davis, Jr., George Heine, Jr., Don Herndon, Judy L. Terrell, Barry White, Joel Evers and Derrel Bryan.

• HAF supports athletes in all sports with grants to assist them in attending camps to enhance their ability in individual sports and offer opportunities to gain recognition from college coaches. This is based on application approval with proof of attendance and receipts as a reimbursement.

• HAF sponsors an academic coach for athletes at HHS who monitors grades and arranges for a tutor when needed.

• HAF provides funding for ACT/SAT testing fees and funding for college clearing house that potential college athletes must register for. We also provide a college professor who conducts ACT/SAT test prep class for student athletes each semester to better prepare them for success on these exams. 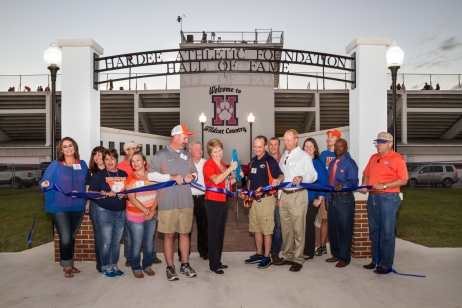 October 14th.was the long awaited day that our board had anticipated for years.  Pastor Jim Davis of Oak Grove Baptist church led a prayer of dedication for the members of the Hall of Fame and their famlies. He mentioned what this wall and the plaques represent to our community. He thanked the families for their contributions to Hardee Athletics by sharing their loved one with us for the hours they dedicated to sports. The HAF Board thanked all the sponsors and individuals who purchased bricks for their contributions that made the wall possible. There are other businesses who made significant donations. The following are from the sponsorship levels.

Many individuals and businesses purchased bricks to help pave the way to complete the Hall of Fame Wall.  We are continuing to sell bricks until every blank brick is replaced with an engraved one. Please contact us to purchase yours or go online to https://www.bricksrus.com/order/hardeeathfound 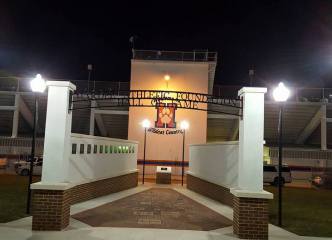 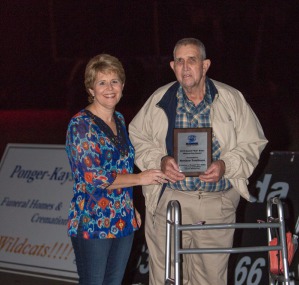 during their Wildcat Way Buy a Brick Campaign.

Wauchula, FL, Friday, April 01, 2016-- The Wall of Fame Wildcat Way Buy a Brick Campaign is underway to raise funds to build the Wall of Fame and brick walkway that will be located near the stadium entrance on the east side of Wildcat Stadium.  The wall will display the plaques of the Hardee Athletic Foundation Hall of Fame members.  The Hardee Athletic Foundation has published a brochure that is available in the community at many restaurants and businesses.

Purchasing a personalized, engraved brick will leave a lasting legacy that will be permanently displayed in the Wildcat Way Walk at the Hardee Athletic Foundation Wall of Fame.

Parents or community members can honor your child or family member, recognize a graduate, remember a loved one, show support of an organization, or advertise your business indefinitely with a purchase of a “Wildcat Way” brick.  Your purchase will not only become a permanent part of Wildcat Stadium at the Wall of Fame, but will support our student athletes for years to come.

Former teams, clubs, band, cheerleaders and classes are encouraged to purchase bricks to be placed together in the walk. Make a note on the order form or contact HAF for your brick to be placed together in the walk. Teammates can have their name, jersey number, team year or graduation year inscribed in the brick.  For example, a team identifying brick would be one engraved with Hardee Basketball 1979 or 1979 Heartland Conference Champions with the bricks of team members surrounding it. An 8 x 8 brick might be engraved with Hardee High Class of 1966, HHS Football State Playoff Team, HHS Baseball District Champions and encircling that brick with individual teammates 4 x 8 bricks with John Doe, linebacker, #45, is one example.  A variety of options are available to enhance this tribute for your team or class. You can remember those teammates that have passed away by purchasing a brick in their memory.

The stadium has recently had upgrades and more are underway. The opportunity is upon us to leave a lasting display of pride and commitment to our Hall of Fame members and the Wildcat Tradition that will last a lifetime. “Once a Wildcat Always A Wildcat”.

The bricks are available in different sizes:

4 x 8 brick with 3 lines of engraving includes up to 18 characters. The 18 characters includes any symbol and spaces count as one character. $100

8 x 8 brick with 6 lines of engraving includes up to 18 characters. The 18 characters includes any symbol and spaces count as one character. $250

Bricks with standard symbols or custom logos may be special ordered for a small additional fee, contact HAF

Online orders may be placed at https://www.bricksrus.com/order/hardeeathfound/

There are sponsorships available:

The brochure can be downloaded as a PDF file from: www.haf-online.org

Businesses should look at the cost of advertising, weekly or monthly and consider how cost effective this lasting advertisement will be for their business.  Games are played three nights a week during football season, there are practices in the area daily for multiple teams, soccer games, track meets, soon, and many community events that are held at Wildcat Stadium.

Help us to reach our goal of building the Wall of Fame before the 2016 Football Season. Reach out to friends and family and share this information. Do not let them be left out of this project. We are on Facebook and Instagram at Hardee Athletic Foundation. Please like and share our page. Invite your friends to like our page. Please spread the word about the opportunity to leave a part of your Wildcat Pride in the “Wildcat Way” at Wildcat Stadium. Support this project today and be a part of the Wildcat Way Buy a Brick Campaign purchase your engraved brick now.

About the Hardee Athletic Foundation

The HAF is a 501 (c) (3) non profit organization, founded in 2008, whose purpose is to provide funds for athletes in Hardee County to enhance their opportunity athletically and academically. It does this through grants and scholarships that are funded by their yearly fundraising efforts. One of their annual events is the Hall of Fame Dinner. Since 2012 eleven members have been inducted as individuals who have dedicated extraordinary efforts to make a positive impact on Hardee County Athletics. The Wall of Fame is to honor those and be a permanent structure to continue to recognize those in the future, whose lives make an impact on athletics in Hardee County. The plaques with each Hall of Fame members’ image will be proudly displayed on the wall.

The Executive Director of Hardee Athletic Foundation, Tanya Royal, is available to meet with you to answer any questions or assist with your purchase of a commemorative brick.

This award is given in memory of Russell "Rut" Baker a devoted and faithful Hardee Wildcat Fan.

The Hardee Athletic Foundation (HAF) has received a $400,000 grant from The Mosaic Company to fund several renovations at Hardee Wildcat Stadium.

The HAF publicly recognized Mosaic’s generous contribution during a “Mosaic Night at the Stadium” event on Sept. 27. The three-phased project includes upgrades to stadium bleachers, renovations to the existing press box and game announcer booth, and resurfacing the existing stadium track.

“It’s with great pleasure that we announce Wildcats Stadium is on its way back to its former glory,” said Derren Bryan, HAF President.  “We are extremely grateful to Mosaic for their continued support of our athletic programs in Hardee County.”

According to Bryan, the bleacher project was completed in September 2013 and the new seating complies with Florida High School Athletic Association safety guidelines.

Planning and renovations of the press box and game announcer booth are scheduled to begin the summer of 2014.  This project includes a memorial to longtime game announcer and Herald Advocate newspaper reporter Luther Colbert for his steadfast support of the Hardee Wildcats organization. HAF has formed a committee to oversee the track improvements, which are expected to be completed in 2015.  A new track will allow the Hardee Wildcats to once again host track and field events and bring the spirit of track and field back to Hardee’s home stadium.

“We are happy to partner with the HAF and support the Hardee Stadium improvements,” said Karen Swager, Vice President of Mosaic’s Phosphate Mining Operations.  “Many Mosaic employees call Hardee County home and this partnership allows Mosaic and the HAF to leave a legacy that will allow the students and community a safe and enjoyable stadium to enjoy together for years to come.  Go Cats!”

About the Hardee Athletic Foundation

The Hardee Athletic Foundation is a charitable 501(c)(3) that supports needs related to athletics and education for individuals and other organizations.

About The Mosaic Company

The Mosaic Company is the world’s largest combined producer and marketer of concentrated phosphate and potash, two essential crop nutrients. Driven by its mission to help the world grow the food it needs, Mosaic is committed to strengthening global food security and protecting critical water resources. The Mosaic Company and The Mosaic Company Foundation make investments in and partner with best-of-class leaders in the focus areas of food, water and local community investments. More information about Mosaic is available at www.mosaicco.com.